Josef Bauer is an artist working in Linz whose work has gained wide recognition in recent years. steirische herbst made his first monographic show possible in the 1960s in Graz. Bauer presented script pictures and black-and-white photographs. The photos show him strolling with letters erected on poles above his head. The preoccupation with the series, with the relationship between name, thing and sign, pervades the development of his work over many decades. Folding is the theme of a different, more malleably-minded, series. Bauer works with poster shreds, which he paints. Corners fold or bend backwards. Single sections overlap each other – others create tunnels or hidden gaps. Bauer covers cardboard with polyester, consolidates a momentary form and lets it harden. That which is momentary becomes stable, and yet the bent forms seem as if they are slowly returning to their original shapes. The material tension remains visible after preservation. Flat and spread out, they were nothing more than foundation, underlay, carrier. Bent, however, they become independent and acutely tense. They have become sculptures even though they were painting, and first and foremost, merely found objects. 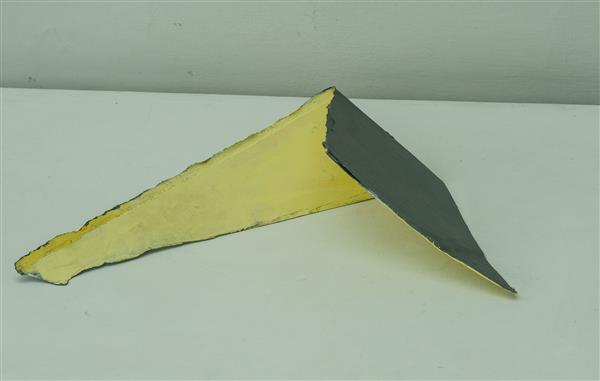